What Makes an Influencer: The Results of Our Survey on Blogger Transparency

At Dolce & Gabbana’s Fall 2017 show in Milan, the Italian fashion house ditched iconic supermodels in favour of social-media-savvy influencers. Aimee Song, the blogger behind Song of Style, strutted her way past the likes of Shea Marie (of the fashion blog Peace Love Shea) and YouTube singer Madison Beer. The women who were cast in the show were every bit as statement-making as the rose-studded designs they modelled. Influencers—who often get their start on social media—are beginning to usurp traditional celebrities as the new wave of trusted trendsetters. These influencers can range from beauty buffs to body-confidence advocates, but their paths to success are often similar: They share their talents or expertise online, rack up tens of thousands or even millions of followers on blogs, Instagram, Twitter or YouTube and then their success explodes IRL. Take, for example, Canadian transgender YouTube sensation Gigi Lazzarato (of Gigi Gorgeous, 2.5 million subscribers), who released a documentary about her life at the Sundance Film Festival earlier this year. Or beauty blogger Huda Kattan (18.2 million followers on Instagram), who parlayed her social media sway into her own cosmetics line, Huda Beauty. Sometimes associations with A-listers can help skyrocket a person’s status. That’s what happened with Kate Young—stylist to Natalie Portman, Michelle Williams and Selena Gomez—who has built an Instagram following of 154,000. What makes someone an influencer is still a bit nebulous. When we surveyed more than 500 FASHION readers online, we learned that 53 per cent of you define an influencer as someone who persuades people to buy or experience something because he/she is well-connected and considered an expert in a particular field, while 38 per cent defined an influencer as someone who influences people to try, buy or experience something whether or not he/she has a next-level online following. Fifty per cent of respondents also told us that at least half of the content that pops up on their feeds is from influencers, so clearly these modern arbiters of taste are slaying on social media, with Facebook (33 per cent), Instagram (27 per cent), YouTube (16 per cent) and blogs (16 per cent) being the top ways to hear their recos.

So how much influence do these power players actually have on us? A fair bit, apparently. More of you responded that you’re likely to be swayed by self-made influencers (35 per cent) than by friends and family (27 per cent) or celebrities you admire (16 per cent). Posts from high-profile fashion bloggers, beauty vloggers and fitness-inspo Instagrammers can garner hundreds of thousands of views or likes, and hundreds of comments. And corporations have taken notice. In January, M.A.C announced that it would be teaming up with 10 influencers to make their own lipsticks for the brand. Many influencers recommend products or earn money via their marketing power—either through sponsorships (like Toronto-born YouTube comedian Lilly Singh, who signed a deal with Coca Cola in 2015 and, according to Forbes, made $7.5 million last year) or through creating their own product lines (like lifestyle blogger and TV personality Jillian Harris, 641,000 followers, who has collaborated with Vancouver retailer Privilege to design her own collections). In our survey, 57 per cent of you told us that an influencer has directly impacted your decision to buy or experience something. 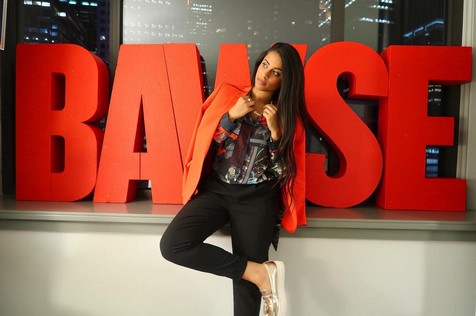 Because we often have direct access to these people online, they hover somewhere in the space between trusted friend and idolized celebrity. There’s an air of authenticity because they’re often shooting videos and images in their bedrooms rather than at a studio and transmitting messages on our personal feeds instead of on corporate-run TV networks. As it turns out, the people who fit in that sweet spot between famous and familiarly real are a gold mine when it comes to persuasion.

Dr. Robert Cialdini, a global leader in influence research, spent decades discovering six key factors that enable someone to exercise power over others’ decision-making, and a couple of those elements can be seen at work among social media influencers—namely, authority and likability. We’re more likely to be swayed by someone who we believe is a knowledgeable, credible source. Cialdini says that endorsements from others is primarily how we determine someone to be an expert. Though pretty much anyone can set up a video camera or snap some shots on their iPhone and call themselves an expert online, comments from viewers and followers provide the endorsements to back up their claims. On fashion vlogger Jenn Im’s YouTube channel Clothesencounters, which has 1.8 million subscribers, commenters write things like “Honestly, I’m so impressed by how Jenn can style literally ANYTHING.” Meanwhile, says Cialdini, we often establish someone as likable when we find we have things in common with them. This came up over and over again in our survey, when you told us you’re drawn to influencers who are similar to you or seem real. One respondent said it best: “I find some influencers have a great emotional influence on me when they share similar stories or stresses in their lives.”

Another factor that’s bound to have an impact on who we follow? Something Cialdini calls “consensus”: when we see others act in a certain way, or follow a certain person, we’re inclined to do the same. Basically, when we notice that someone has four million followers, we want to see what all the hype is about. Even Beyoncé isn’t impervious to influence: When she saw a video of teen singers Chloe and Halle Bailey performing their cover of her song “Pretty Hurts,” which was being shared and racking up views, she posted the clip on her Facebook page and a year later signed them to her record label.

This new class of artists and tastemakers is dominating industries in ways that were unimaginable even a few years ago. If you aren’t yet a follower, it’s time to meet the people who are shaping the future of fashion, beauty and beyond, because the powers that be are changing, and influence has never been more shareable.